Can a school ban pictures of students with guns?

Question | Student Expression
We have a target club at our school, and our school’s newspaper published a photo of one of the members at target practice, pointing a gun. Some parents have complained that the article should not have been published because having a photo with a student holding a gun is “inappropriate.” They complained that since the dress code prohibits students from wearing clothes that promote violent or illegal activity, pictures of students with guns should not be allowed. Can the newspaper get in trouble for publishing the picture?

Yes, your school newspaper can get into trouble for publishing the picture. 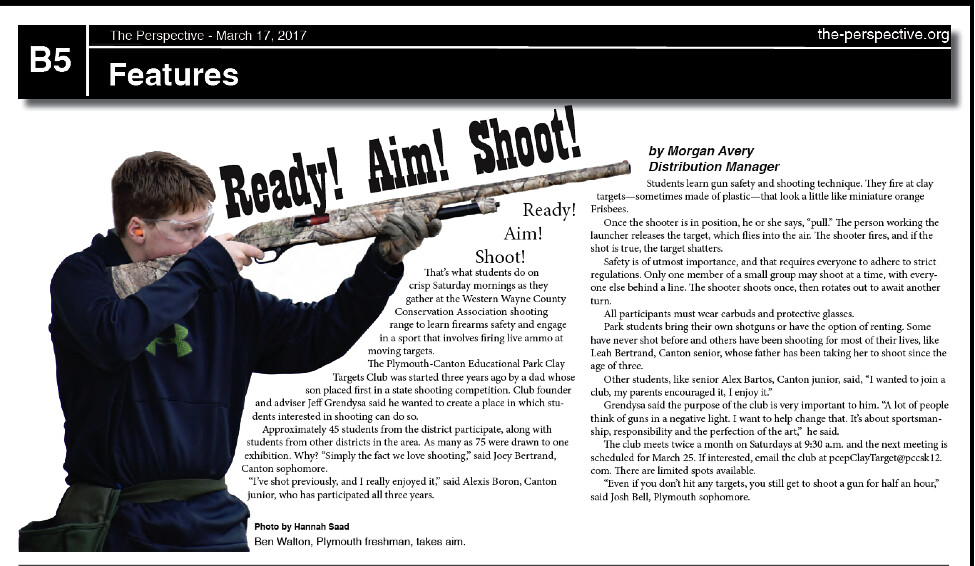 Schools are allowed to censor student speech, like a school’s newspaper, when that speech is sponsored by the school and contrary to the school’s mission. This is especially true if the school’s practice is to approve the articles before they are published. Schools should examine multiple things. Besides whether the speech is protected under the First Amendment as political speech, the school looks at how much control they actually have over the newspaper, the context in which the photo is being published, and the actual content of the photo. This context includes: Is it a team photo? Is the school name in it? Is the gun being pointed or aimed? At the end of analysis like this, a school probably would have the power to censor that photo because schools wouldn’t want the photo to be perceived as promoting violence.

Decisions about whether to publish a photo of a student with a gun must balance students’ constitutional rights with the school’s mission and responsibility to maintain a safe, non-disruptive school environment.

A Closer Look: Your Constitutional Rights and Your Safety 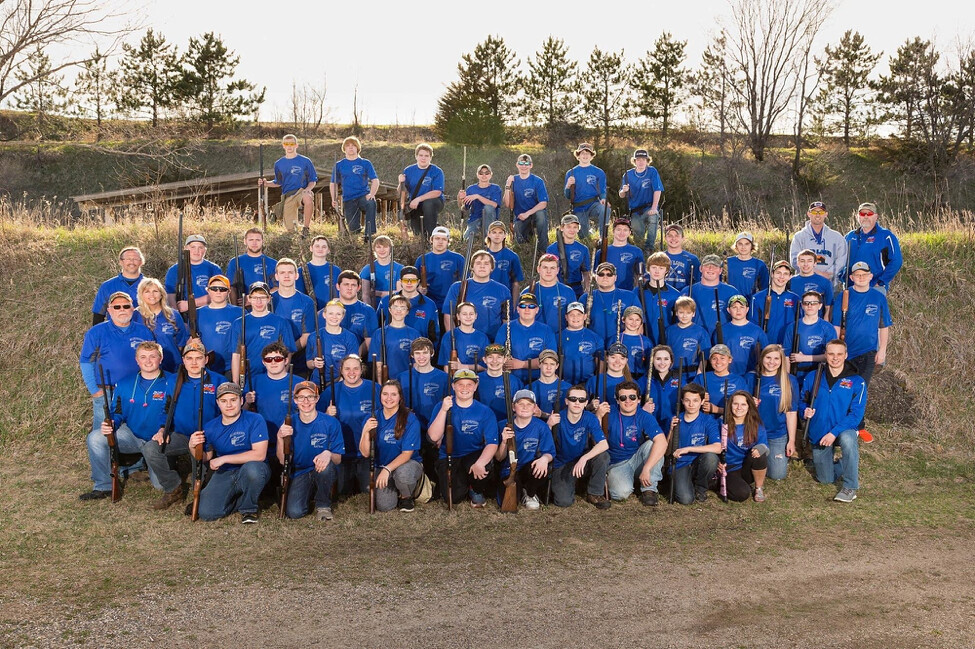 Just with any potential publication, a school could possibly censor this photo depending on a few factors. The target club is an approved club or sport at your school, just like the baseball, hockey or golf teams. Certainly, the target club deserves to be in a yearbook or school newspaper. It’s pretty typical of a yearbook to have photo spreads of school clubs, or for a school newspaper to report on the accomplishment of sports teams. In those photos, it would be typical to show students holding a baseball bat, a hockey stick, or a golf club because that is the equipment used for the sport. An article about the target club shouldn’t be any different, right?

While baseball bats, golf clubs, and hockey sticks can also be used as weapons, the context surrounding guns is different. Americans aren’t routinely clubbed to death by hockey sticks or golf clubs, but thousands have died by gun violence. In today’s context, guns in school can bring reminders of school shootings, especially since there has been an increase in school shootings per year. On average, in the first five months of 2018, there’s been one gun incident every week at K-thru 12 schools and college campuses.

Recently, the school shootings of Stoneman Douglas High School in Parkland, Florida have increased the debate over gun control laws. However, the Second Amendment constitutionally provides citizens with the right to bear arms. The Second Amendment was designed to allow citizens to overthrow a corrupt government in case the liberties of people are severely threatened, like during the Revolutionary War. Under this rationale, an article about the target club with a photograph that shows students holding guns, or a senior photo of a student holding a gun could arguably be protected political speech under the First Amendment – especially if a student intended to express support for the Second Amendment. Yet, guns in schools is a big issue, and many students and teachers have died in school shootings. So, a picture of a gun being shot or deliberately aimed arguably shows violence, and could likely be censored. A picture showing a student holding a gun in a non-threatening position, without a hand near the trigger, may be more reasonable. For some schools, any picture of a gun, no matter how it is positioned, is not allowed in a school publication.

Decisions about whether to publish a photo of a student with a gun must balance students’ constitutional rights with the school’s mission and responsibility to maintain a safe, non-disruptive school environment. For the most part, schools must consider the context when making a decision to allow or censor such photos in the school newspaper or yearbook.

Schools have the authority to censor student speech if it could substantially disrupt the learning environment. A substantial disruption is one which causes a disturbance within the school environment, whether it is causing fights on school grounds, taking a student’s or teacher’s focus off class, or physically preventing someone from getting to class.

Some schools also have policies of “prior review.” This means school administrators can review student articles for things like grammar, fact checking, or violations of school policy. A school might be able to censor the article if it can point to specific facts that show the article would likely cause substantial disruption (such as fights breaking out in school from similar articles in the past).

In New Hampshire, a district court had to decide whether to allow the censorship of a photo of a student holding his firearm in the yearbook. In that case, however, it was student editors who decided to pull the photo, not the school. Because student journalists are not part of the school administration, they did not violate the First Amendment, because the First Amendment only protects you from government actors (public school teachers, principals, administrators, etc.) shutting down speech. Only the government can infringe upon your constitutional rights.

Forum: Who Sees It?

Another important factor to consider is the forum in which the picture appears. The forum of a student publication largely depends on school policies. A publication or activity that has a curriculum, relates to a class, has required participation, or is taken for class credit is considered school-sponsored, meaning the school has more authority to say what can and cannot be published. Courts might also consider whether there is a faculty supervisor, how much control the faculty supervisor or the administrators have over the publication, and whether the administrators have reviewed the newspaper before publication of previous issues. Student newspapers or yearbook classes taken for credit are good examples of non-public forums. There are three possible forums: public, limited public, and non-public.

Some school newspapers might be considered a “limited public forum,” where the newspaper might be distributed outside the school, the public might subscribe to it, buy ad space in it, or even write editorial comments to be published in it, but the schools, by policy, are able to censor out certain images and articles. In a limited public forum, schools have less authority to censor the speech, but still might be able to if they can show that the content of the publication would disrupt the school’s mission to educate their students.

When schools have strong control over a school-sponsored publication, courts have allowed them to censor articles as long as the school has “a legitimate pedagogical purpose.” This phrase just means any purpose that the school considers related to its mission of teaching, from weeding out bad grammar, bad research, or material not suitable for a student audience. If the school thinks that the students are not mature enough to be reading the content––as is sometimes the case with articles dealing with pregnancy, drugs, or other more mature content––the school may remove that article.

In the case of guns, a school could believe that its students are too immature to understand the difference between a gun used for sport and a gun used for killing. The school might also want to avoid giving the impression that it endorses guns or gun violence by allowing the publication of a photo of a student with a gun.

A Constitutional Balance: Your Photo Examined

As you can see, there are a few factors your school might consider before censoring a photo of a student with a gun. The first is the context in which the photo is being published: Columbine, Sandy Hook, and Parkland, among many others have been deadly reminders of the risk of gun violence in the modern world. In making a decision about having a photo of a student holding a gun with their school name across it, schools will likely consider this tragic history.

The school must also consider what type of forum the newspaper is and what its policy is for publication is. School-sponsored newspapers that are part of a curriculum will be under greater school control, but even newspapers that are limited public forums might be subject to censorship if the school can point to a legitimate reason for pulling the picture.

The school might also consider the composition of the photo: whether the school name is in the photo, how the gun is positioned, whether the student is holding the gun, whether the student is aiming the gun, and where the gun is being pointed. If photo looks like the gun is aimed or pointed at the photographer or another person, the school has a stronger argument to censor it, as it could imply violence. Holding the gun in a non-threatening manner, with the barrel up, or slung over the back with a shoulder strap would be more appropriate. The type of gun in the photo might also make a difference: a painted rifle used for target shooting will be far more appropriate than a photo of a privately-owned hand gun. Essentially, the school would want to draw the line between a photo of a sports team or a student with a hobby, and a photo that promotes violence.

It is important to remember that you don’t shed your “constitutional rights to freedom of speech or expression at the schoolhouse gate.” A school might censor a photo that promotes violence, but a neutral report about a school club in a newspaper can’t be censored, nor could an article about gun control legislation. Political speech is the highest tier of protected speech under the First Amendment. Beyond articles, a student wearing a shirt in support of the Second Amendment would be protected unless it is done in some disrespectful manner or there is a very strong legitimate pedagogical purpose to censor it.

This balance of context and constitutional rights would be the ultimate decision maker in censoring the photo.