Can my school punish students for posting racist stuff online?

Question | Offensive Speech
After my school won a basketball game against our rival, another student from my school tweeted:

“lol ni**ers think they r sooo good at basketball but should prob go back to picking cotton after that loss!!!”

A lot of students are upset and angry with that tweet and reported it to the principal, but they aren’t doing anything about it! It doesn’t seem fair that he can say racist stuff like that. Isn’t there anything the school can do about this? Other kids at school have gotten in trouble for social media, so why aren’t they punishing him for the racist tweet?

There’s probably not much the school can do about the racist tweet. 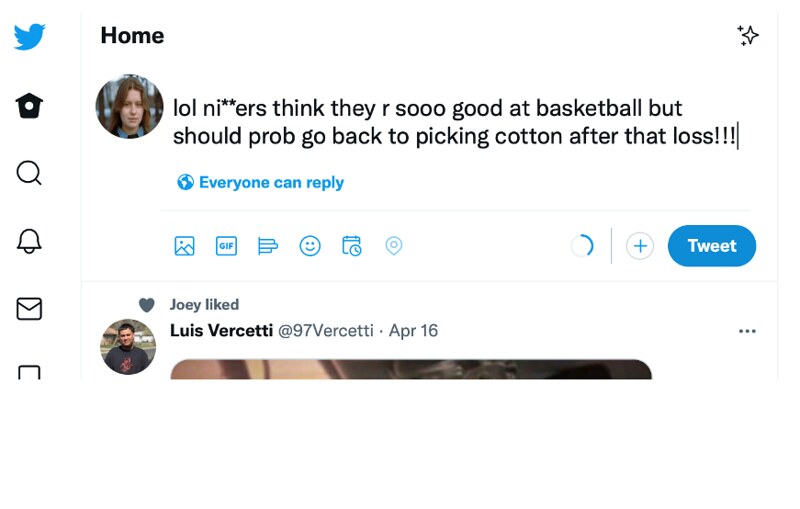 The great thing about the First Amendment is that it protects our rights as individuals to freely express our opinions. What it also protects are opinions we don’t agree with, even opinions that are just plain offensive.

Are Racist Tweets Protected by the First Amendment?

The Supreme Court has identified a few categories of speech that aren’t protected by the First Amendment (which means the government can censor them). These unprotected categories are:

Although the student’s tweet is racist and offensive, it doesn’t fall into any of these categories of unprotected speech, so it still gets protection under the First Amendment. Not all offensive speech is protected, though...

Categories of Speech NOT PROTECTED by the First Amendment

Fighting words are extremely likely to instigate an immediate and violent reaction to the speaker. In other words, the speaker says something so terrible that any ordinary person would be tempted to hit them just for saying it. So can the student’s tweet be considered fighting words? Not quite. Here, no one immediately picked a fight with the student after he tweeted the offensive remark. The tweet would have been fighting words if the student challenged fans of the rival school to a fight. For instance, if the tweet said: “ni**ers think they r sooo good at basketball… bet they suck w/ knives too. any one of em can meet me in the parking lot after the game to prove me wrong.” Because the student didn’t invite any violent action and no one immediately picked a fight with him, the student’s tweet doesn’t fall under fighting words.

Incitement is basically when someone is encouraging illegal activity and that illegal activity is likely to happen. An example of incitement would be if the student tweeted something along the lines of “we should teach that guy a lesson and key his car” and another person actually carried out the illegal act soon after the statement was made. So did incitement happen here? Nope, this doesn’t work either. In this situation, the student’s comments are without a doubt offensive and racist, but aren’t considered incitement.

True threats are statements that show that the speaker intends to hurt a specific person or group of people. The tweet probably won’t be considered a true threat. While the student’s tweet targets one race, it doesn’t show a serious intent to commit a violent act.

At the end of the day, the highly offensive and racist tweet is hate speech, but is protected under the First Amendment (even if you may not be happy about it). Luckily, even though the First Amendment protects speech (even the most unsavory kind) it does not protect bad physical acts (violence or vandalism), or words that might immediately lead to someone getting hurt.

Can the School Get Involved Anyway?

So far we’ve determined that racist tweets can get some First Amendment protection. Even so, the school may still be able to get involved if the student’s tweet was:

For your question, let's consider each category:

Targeted violent threat? Based on the language of the tweet, it likely won’t be considered a targeted threat. The student didn’t name anyone or threaten violence. If, on the other hand, he had tweeted something like “I’m gonna meet Player #43 out in the parking lot and beat his black ass,” the school could step in and censor the student’s speech, even if the fight never occurred.

On or off-campus disruptive speech? This also probably won’t work. To be considered disruptive, the tweet would have to upset the learning environment at the school. For example, think students delaying a class because they’re all talking about the tweet and not paying attention to the teacher, or a student starting a fight in the hallway with another student who says he supports the tweet. Unless the tweet caused some form of actual disruption, it’s unlikely the school can censor it.

Lewd and vulgar speech? Nope. Racist speech wouldn’t fall into this category. It’s not sexual. It doesn’t have swear words and it’s not about an obscene, dirty or toilet humor subject, like body functions or penis jokes.

Speech that violates a school policy? Does your school have a policy that says a student could be disciplined for making distasteful comments about ethnicity, race, or sexual orientation? If so, the student here could be penalized. To know for sure, you’ll need to consult your school’s student speech policy because each school has its own rules on student speech.

Bullying or harassing speech? Yes, racist speech could fall into this category. Some states allow schools to censor students for saying mean things or for tormenting others. This student’s tweet could easily be considered bullying or harassment. Most schools take bullying speech very seriously! But schools can’t shut down every single post that could be offensive. Imagine how many students would be punished if schools could shut down all offensive speech! Again, not all states take this strict approach, so you’ll need to do some independent investigating to find out what stance your state takes. In any event, schools need to consider every situation carefully when deciding whether to censor speech!